I’m sitting in a local food place waiting on my food order when I over hear three men having conversation on the topic of national symbols. One young man in particular stated that the Lignum Vitae is the national Tree but no one has ever seen one, and asked his two friends have they ever seen one. they smiled in an embarrassed way and answered no What was also more shocking is that another person much older than the young men interjected and stated his point that for his 5o odd years he has never seen one. this caused a bit of laughter among the patrons of the establishment as it seemed as if no one in this place knew what the lignum vitae tree looked like or could say that they had ever seen one in real life. This is where I could not in all good conscious sit an allow this conversation to continue.

The truth is that there are many trees sprawled around the Bahamas but we just don’t know what to look for. I 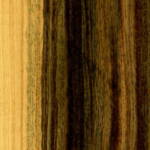 became a noisy neighbor and interjected in to the conversation telling the young men and every one else in the establishment that the chances are great that they have all seen the tree but just didn’t know what it was.

The first question I asked is has anyone ever stood in front of the Sir Milo Butler Statue in Rawson Square? A good many of them said they have been there or have seen the statue.

Well then there you have it. You have seen a Lignum Vitae tree 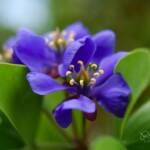 The looks on their faces were as perplexed as a cat watching a rat eat from its food bowl.  I laughed a bit and explained. The national tree is actually on both sides of the Milo Butler Statue. They are relatively young trees but they are pure Lignum Vitae trees. Right then the light bulb went off in one of the young men head. ‘Yes, I’ve seen them before but didn’t know it. They have those purple flowers on them’ is what the lead conservationist said.  He went on to explain to his friends the look of the tree much like a child on the first day of school after summer break.

A few weeks later a close friend of mine that patronizes Bahamas Candle and Soap asked me why are there so may soaps made for females. Although our soaps are unisex I did realize that it could be construed to be leaning toward women. So I told him I will make more masculine bars and just like that… Lignum Artisan Handmade Soap was conceptualized and a few weeks later it was on the market.

Making Bahamas Soaps or rather soaps inspired by the Bahamas and its people has become a joy for our company. We look forward to making more as the years roll on by.

Do you have an idea for a Bahamian inspired soap? please let us know your ideas we would love to hear from you.

For more information on the Lignum Vitae visit The Bahamian Photographer

Rashad has been making soaps since the inception of Bahamas Candle and Soap in 2008. Since this time he has taught a number of students how make homemade soap using the melt and pour process or the cold process of soap making. His preference is cold process soap making because of the versatility you have in designing not only the ingredients but the aesthetics of the soap. Soap making became more than a hobby for Rashad and he loves trying new techniques and teaching others how they too can make their own soap at home.

link to How to harden cold process soap faster?

Sooner or later, you will come to the point where it seems as if you are waiting forever for your soap to get hard enough to remove from the mold. Most often even after removing it from the mold...

Continue Reading
link to How to add color to cold process soap?

Learning how to make soap using the cold process method can be a bit difficult in the beginning, however once you get a hang of things it gets easier until it becomes almost second nature. Sooner or...

We offer candle wax, wicks, tins and fragrances to help you make the best candles on the market. We also supply the best unadulterated olive oil on the island along with coconut oil, sweet almond oil, Neem oil and Castor oil all great for cold process soap making.

In addition to the soap making oils we carry sodium hydroxide, sodium lactate, mica, pigments, fragrances and essential oils all for soap making. If you prefer the quicker route we also keep in stock read for you, our melt and pour soap bases in clear and white.

Make the best soaps you can imagine using our fragrances, color blocks and soap cutters. We are here to help you be the best candle and soap crafter or business in the Bahamas.

If that wasn't enough we offer candle workshops and soap making classes to help you improve your skills. Lastly but no means least visit our projects section for free recipes, tips and tricks of candle and soap making. Sign up for your Newsletter and become a part of the Bahamian Candle and Soap Community.