Why is there soda ash on my soap? 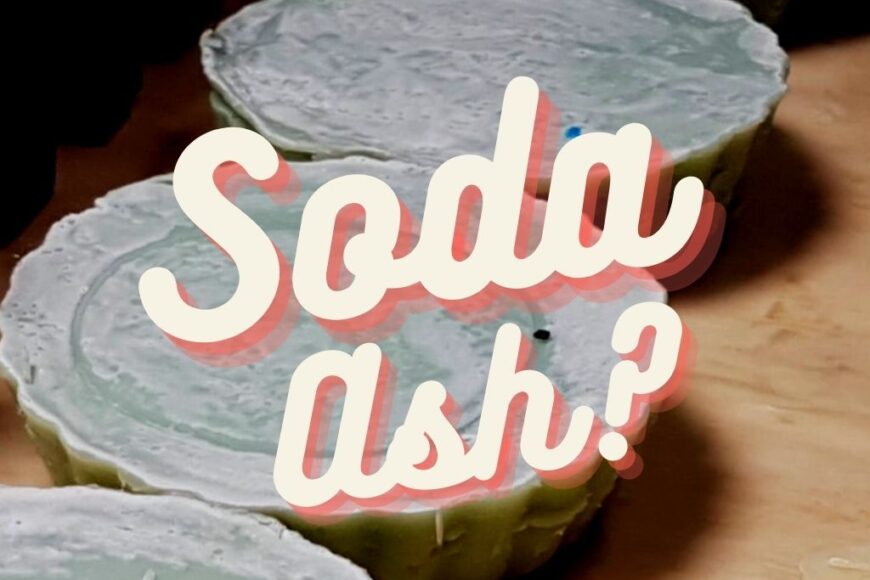 Why is there soda ash on my soap?

I remember the first few soaps I ever made, an exiting time to try new recipes and see what I can do. Experimenting with color and additives all in the attempt to better my skills but also build up some experience. I ran into a problem with soaps in that they came out with some sort of white film on it. After some online research I found out that is was soda ash hence the question arose, Why is there soda ash on my soap?

Soda ash will appear on your soap as a reaction to unsaponified lye in your soap batter with carbon dioxide in the air.. That is to say if you use too much lye to convert your oils to soap you will have soda ash on and even in your soap when you cut it. Its one indication of an overage of lye or less oils.

This however is just one way you can have this white thin crust on your soap, there are other potential culprits that you may not be aware of. Lets cover a few causes to the formation of soda ash on your soap below.

Before I can discuss why soda ash is on your soap we have to discuss what is it.

This white film layer of ash is actually useful in other industries such as cleaning and personal care. Its purposely made and collected as sodium carbonate, which is naturally occurring in salt. Its so useful it can be seen in many products such as a pH modifier, in swimming pool chemical and as an electrolyte. It is also used in the manufacture of glass, paper, soaps and other detergents. There are many other uses for this ash but for soap making it can be a nuisance.

Although its unsightly there is no adverse affects to using your soap with soda ash on it. So lets take a look at other ways this soda ash / sodium carbonate will most likely appear on your soap.

Thats right excess water will cause soda ash to appear on your soap. This is seen most often for swirl techniques that require a bit more water to allow the soaper some time to make those beautiful swirls. Most often in this regard the soda ash can not only be seen on the top of the soap but often throughout the soap itself when cut.

This is by far the biggest known factor to causing soda ash development in cold process soap. To avoid this major mistake you have to adjust your technique for making intricate swirl designed soaps. Some adjustment such as a water discount will drastically reduce the overall chances of soda ash forming.

Unfortunately the less water you use the faster your soap will come to trace hence you must use other techniques to prolong your ability to create swirls. Without getting into a lesson on soap designs its best to state that you will have to test out a few techniques to find out what works best to avoid soda ash on your soap.

Another side effect of excess water is again related to having too much lye in your soap. Remember when you mix lye water with oils, the chemical process converts the oil and lye to soap. If your calculations are off even by 0.2oz this little amount in your batter will cause the formation of soda ash especially in a mix with excess water.

Test your recipes to find out what is the bare maximum amount of water you will need to be able to create swirls but at the same time reducing the formation of soda ash.

As a part of making swirling soaps, the best way to make a design is to pour your soap batter at a thin trace. This thin batter also is more susceptible to the formation of soda ash throughout your overall soap. To prevent this issue you may have to take your batter to a light medium trace which can be difficult to achieve depending on your oils and fragrance.

Thin trace can be achieved if you work fast enough but with a slightly higher temperature. Soaping at higher temperature does accelerate your soap batter to trace hence you will have to plan ahead of time and work quickly. This added heat will reduce the actual contact of carbon dioxide on your soap from the steam rising from your soap.

We know that the reaction in cold process soap can sometime take the overall soap mixture up to over 140 degrees fahrenheit. This heat is enough to help reduce the formation of soda ash on your soap. Soaping at cooler temperatures will obviously cause the formation process to begin hence another reason to allow your soap to go through gel phase by heating up.

Another option is to cover your soap as soon as you pour and spray with alcohol. Alcohol when sprayed on top of your soap will help dry out the soap and form a sort of protective layer against the carbon dioxide and the lye. To do this though the higher the percentage of alcohol the better. We recommend the 90-99% rubbing alcohol however a moderate amount of 70% rubbing alcohol will work just as well.

Soaping at low temperatures is a technique used to help develop a better bar or soap when it comes to designs. Low temperatures in conjunction with excess water tends to be the best type of recipe to create amazing swirls. The problem with this lower temperature is that it allows the unsaponified lye to react with the air for a longer period of time.

As I mentioned before soaping at higher temperatures will help reduce this contact of lye and carbon dioxide. All hope is not lost however as there are other techniques you can use for your lower temperature soap making such as heating your soap after you pour and designed your soap.

This can be done by putting your soap to bed… i.e. covering it with towels etc. to keep the head around the soap itself. Some persons use heating pads or even an oven that has been pre heated and then cut off to keep the soap warm. Whatever method you use just know that hotter temperatures can

If you are not so keen on low temperature soaping just try to keep your soaping temperature to at least 100 degrees Fahrenheit. This is where a good laser thermometer comes in very handy.

Adding certain fragrances or even other elements to the soap can also cause the reaction of lye to the air. Be sure to read how well a certain fragrance reacts in cold process soap. Some fragrances can accelerate trace while others can discolor your soap all together.

All these combinations are usually stated by the company you purchase the fragrance from. What you want to look for is some wording that states that the fragrance was tested and it behaves well in cold process soap. Without this information you will be testing your soap and its often difficult to say what went wrong at the end of your soap making test.

Adding other ingredients like witch hazel, wine, sugar and the like can also cause your soap to either heat up or cool down and in some cases cause the reaction between lye and the air to be stronger. All in all its a general trial and error while keeping notes of what you have been doing.

Each soaper is unique and their technique proprietary, hence its very difficult to know all the combinations of techniques and ingredients that may cause the formation of soda ash on your soap.

Fortunately there is nothing to be afraid of from that white stuff on your natural handmade soaps.

If you find soda ash on your soap, that white stuff on top of it, just wipe it off with water and a cloth. You can use the soap as normal since the soda ash will not react in anyway with your skin. Yes it may be unsightly but its harmless to the human body.

There are several methods to remove it from your soap which include,

The crux of the whole soda ash matter

No matter how many precautions we may make and how many dozens of experiments we make, the fact remains that carbon dioxide is not goin anywhere hence soda ash is bound to show up sooner or later.

When it does rear its head on or in your soap just remember its not life threatening and will not diminish the performance of your soap. Its just a side effect of the saponification process and one that is easily remedied.

What ever method you use to soap and to remove any soda ash remember that there are ways to prevent it if you take into account the causes of soda ash.