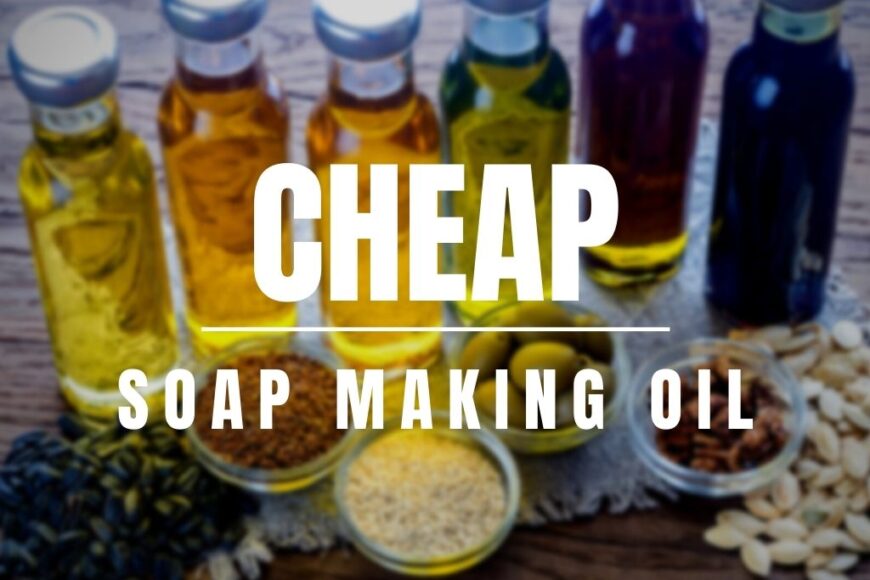 Sometimes you just want to make a cheap bar of soap instead of one of those overly expensive handmade soaps. To do this you need cheap oils to make your low cost soap and we recommend you consider low cost soap when starting out to improve your soap making skills.

With all that said, what is the cheapest oil for soap making? Canola Oil is the absolute cheapest out of four vegetable oils for soap making Unfortunately alone they do not make good soap.You will have to combine with another oil for a balanced soap.

What makes Canola Oil so cheap

Canola is actually GMO plant. Which means its genetically modified. Or is even simpler terms… Its technically man made.

Canola was developed by selective breading of the rapeseed plant which took out some of its harmful components and created an oilseed plant.

Because its been designed to be resistant to herbicides and pest the yield on a canola harvest is pretty high.

This in turn makes it easier to grow and develop and even easier and cheaper to make the canola oil.

Little fact about canola oil… It was developed in the 70’s in Canada and its name CANOLA is a derivative of Canadian oil, low acid.

The low cost of canola and its properties makes it a great substitute for the more expensive Olive oil in soap making.

Like olive oil it produces a stable not so bubbly lather but will give you a well balance bar of soap when combined with harder oils.

Another cool aspect of the canola oil much like other soft oils is that it will slow down the speed of your soap trace. This aspect can come in handy when developing swirl techniques.

Unlike olive oil however, canola oil should make up about 30% max of your soap recipe.

Palm oil, sunflower oil and lard make up the next 3 cheap oils for soap making list. Well maybe not so much lard as its not really an oil.

Palm oil price is pretty stable and low cost compared to other oils however there are some concerns on the way it is produced. Because of this many soap makers steer clear of palm oil.

It is a really good oil for soap making and if you can find a company that ethically sources palm oil by all means go for it and give this oil a try in your next batch of soap.

Sunflower oil is on the list of cheap oils for soap making as its also an oil that can be easily sourced from plant matter.

Like many oils the seeds are processed to produce the oil and sunflowers have a lot of seeds to process.

This makes it a great candidate for a cheap oil.

Lard is not really in the same running as the other oils stated but it is cheap. If you have no issues with using fats from animals then lard may be a good option.

Its readily available in many food stores and can be added to many soap recipes.

Base oils for soap making

These oils are the go to oils for soap making but as you can see they are not as cheap as the others mentioned.

Coconut Oil is a very good oil to use for soap making but its not as cheap as canola oil.

Using coconut oil as a stand alone oil in soap is possible. This is call bastile soap. It produces a hard long lasting bar with thick bubbles but it can be overly cleansing.

Find out more about coconut oil as the best oil for soap making in another article HERE.

Castor oil is that one oil that most people forget but when they do remember it can be a soap saver.

This type of oil is thicker than most oil and it should be used up to 5% in your soap recipe.

It adds that little boost of lather for an otherwise low lather soap.

Olive oil is really the be all and end all of soap making. Its often the main oil in many soaps. To make it even better it can be used as 100% of the oils in a soap.

This type of soap is called castile soap and it takes a few months to cure properly.

The good news is that although olive oil is expensive you can substitute up to 30% of it with canola oil and still get the same results.

There are several cheap oils that can be used to make handmade soap. However they are not always the best oils to use in your soap if you want a well balanced bar of soap.

Cheap soap is not always the best soap for your skin but there are some oils that can be used that you or persons who you give or sell your soap to will absolutely adore.

What needs to be clear is how your cheap soap will perform. In many test one oil soaps tend to have a strong quality that can can give a good lather or give a creamy lather.

Creamy lather is worth mentioning because I have had persons tell me its to slimy. Be very careful of creamy soaps especially in the Caribbean.

Living on an island near the sea our skin tends to get a bit drier than other places. Add into that sun dried skin a bit of salt air and you realize why Caribbean people prefer a strong bubbly lather.

The cheap oils mentioned above do not offer this rich lather. Instead they give a stable low bubble lather with a creamy or moisturizing feel.

Fellow soapers that live in North America and Canada seem to like this type of creamy feel to their soaps.

So with this information you can still develop a cheap bar of soap for your region and something that you, your friends or clients will love.

Just remember to keep in mind what the market is asking for. In this article we will focus on developing a cheap soap for persons living in the Caribbean.

This translates to a hard, bubbly soap with good lather.

To make a cheap soap with cheap oils we will focus on just two oil. One will an oil from our cheap list and the other will be from out staple list of oils.

By combining the two oils you can make a pretty low cost soap with good qualities.

The best thing to do with cheap oils is to combine them with other oils with much better properties that will allow for a better designed and usable soap for your skin.

Okay we know you may just be wanting to try out a new technique or to practice your soap making skill and that is fine. We recommend you do this.

What you don’t want to do is practice with your cheap oils and have a ton of unusable soap sitting around your house.

If you are not good at designing soap recipes, not to worry. The good news is if you stick with the 50/50 rule there is a good chance you can make a fairly cheap soap that still performs well.

The basis of the 50/50 rule is to combine two oils together to make a good quality bar of soap.

Im this recipe we will combine a cheap oil with a staple oil that cost a bit more but the end result will bring aobut a pretty low cost bar of soap.

Where to find cheap oil for soap making?

Cheap oils are often so cheap that you really dont have to look very far for them.

Most food stores whether a large chain store or mom and pop store will carry many of the oils you need to make your soap.

Canola oil is usually in the cooking aisle along with many of the other oils mentioned.

You must pay attention to some of the base oils as they may be adulterated oils. Olive oil is known for being swapped out for inferior oils.

How to use cheap oils for soap making

The results will be virtually the same unless you do scientific studies, you nor your friends will know the difference.

This is what makes canola oil such a good substitute for olive oil. It properties and the way it reacts in cold process soap is identical.

Use the cheaper oils to reduce the overall cost of making a loaf of soap. Trust me they come in very handy and can drive your profit margins up.

How to start a Product Line for your Handmade Business?
What is Adulterated Oil and how to spot it?
Mr Grey vs Eczema, Our Story
Which is better commercial soap or handmade soap?
Is Olive Oil good for Handmade Soap?
cold process soap makingoils for soapsoap making