Mr Grey vs Eczema, Our Story 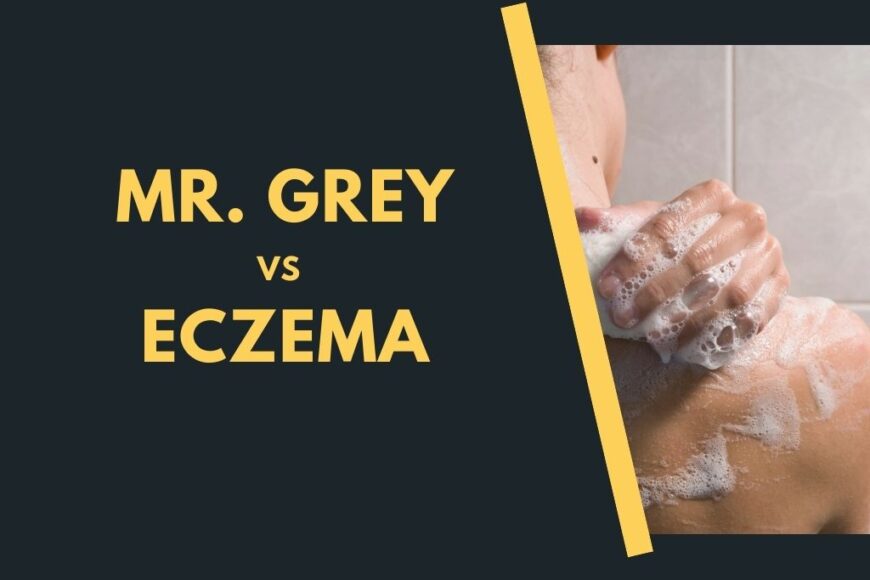 Mr Grey vs Eczema, Our Story

I had no idea what eczema really was. Seriously. I heard about it and I’ve heard and watched commercials on tv about it but I never really understood what it really was.

This article is a story of how we developed a handmade soap to help combat the symptoms of eczema that was plaguing our daughter.

No one in my family ever mentioned that they had this issue so why would I know any more than it is a skin condition that causes dry itchy skin.

I wasn’t until our daughter wad diagnosed with the skin issue at first glance by her pediatrician.

It was so nonchalant… ‘oh I see a mild case of eczema there but its not to bad’ He said.

At first the statement went over my head but then it clicked, What did he just say?

We had seen our daughter scratching her belly area and sometimes around her neck and back from time to time but didn’t see much of an issue with it as it wasn’t often.

We thought it was just a sign that she was a bit tired and wanted to sleep.

So when the doctor said the word eczema we both took notice.

He explained. ‘Oh its something that is common place where children tend to have eczema’

He mentioned that his own children has the skin issue and from his tone it was if it was no big deal, for us however we were shocked.

Neither myself nor my wife have anyone in our family that reported such issues of itching or dryness of the skin.

So we were wondering well what caused it? We don’t have it. Is it hereditary? Is it something she ate? What?

Apparently the exact cause of eczema is unknown, but it’s thought to be linked to an overactive response by the body’s immune system to an irritant. It is this response that causes the symptoms of eczema. – Source Webmd

So we have no idea what may be causing it but we know we can reduce the symptoms.

There are lots of information out there on how to reduce the flare ups and how to keep your child itch free. The one thing that really caught our eye is to reduce dryness of the skin.

Okay cool so we can do that. We make soap after all. Hence I went to work designing a soap that not only was skin loving but will keep the skin moisturized while removing any bacteria and has no chemicals not even essential oil.

A soap designed to counteract the symptoms of eczema but gentle enough to use on our baby.

It took a lot of trying looking for ways to make such a magical soap but after much trial and error we came up with two hand made soaps that would work great.

The first, as we tested, would be best for persons with very sensitive skin but do not have extremely dry skin. This was the making of Baby Carrot.

The second was made to combat a lot of issues but also help add moisture to the skin especially for persons with dry skin. This was the making of Mr. Grey

So now we had two soaps to work with. Initially we used the Baby Carrot on our baby.

It was amazing how well it worked but there was a problem. She still had her dry skin after a bath. We found ourselves using coconut oil or almond oil to moisturize her skin.

The coconut oil worked well but because its so thick it easily got rubbed off her skin from clothing or her just being a baby moving about.

The Almond oil however seemed to absorb into her skin better. So this gave me an idea to adjust the Mr. Grey to include the Almond oil.

Well why not just add it to the Baby carrot?

Well because of the make up of baby carrot it uses a lot of coco butter along with some almond oil already so by adding more almond oil it will have to use less of another oil and change the qualities of it.

Hence Mr. Grey was used with oils that work well with almond oil so adding more, I could adjust the recipe to still work very well.

So now with the new formula of Mr. Grey we began testing on ourselves as usual and once we noticed the benefits we began using it on our baby.

Within a few days, less than a week her skin began to change. It wasn’t as cracked or dry looking.

Her face cleared up and she stopped scratching. This was it… This was what we needed. We made a soap that worked like magic on our baby and we can fight the effects of eczema.

After this however we wanted to go further.

We were using almond oil on her skin but after researching shea butter we realized that the properties will work well with persons with eczema as well but before we tested it we wanted the purest form of shea butter.

There are lots of brand out in the market but luckily we were parents that know how to do their research.

We dug deep into what to look for and what was the best type of shea butter to get.

It came to the point where we were looking overseas beyond The Bahamas and beyond America to find what we wanted. Finally we found a small company in Ghana that was producing what we wanted.

We linked up with the company and purchased a small order to test. We were so excited.

The best that we found on the market. We made a great connection with the company owner and found that they offer other products like traditionally hand made African Black Soap, more on this later as its amazing product.

So now we have our eczema fighting soap and for extra moisture a skin loving and nourishing cream in the form of pure unrefined shea butter. Oh boy what a combination.

Since we started using this amazing combination of skin cleaning and moisturizing our baby has had little to no issues with eczema flare ups or itching.

Battle with the elements

We did however notice that if the air is dry her skin dries out quickly so we took it one step further and made our whipped shea butter.

Oh man what an awesome idea. It goes on so smooth and makes a protective layer from drying out. We couldn’t ask for anything better as its all natural.

When we went back to the pediatrician for a check up he noticed the difference and asked if there any more flare ups.

We said no, so he stopped… Really! what cream are you using? Did you use the steriod I recommended?

No we answered we wanted to keep her away from extreme chemicals as long as we can so we made a soap for her and we use whipped shea butter as a lotion.

This definitely got his attention. Needless to say shortly after that visit. The pediatrician and his staff placed an order of our newly made soap to test out.

It was a small order but I understand the reluctance to switch to a handmade soap over clinically prescribed products. This didn’t bothered us at all because we knew what we had was good.

A week later they make another order but this time a large quantity. If our pediatrician could vouch for our soap we knew for sure we were onto something pretty awesome.

Our daughter is now a toddler and we continue to use Mr. Grey on her skin along with the whipped shea butter.

We have tweaked the recipe for both products to reach a state of hard long lasting and skin nourishing bar of soap.

Is Olive Oil good for Handmade Soap?
Why I gave up using Commercial Soap
What is Commercial Soap?
What is Adulterated Oil and how to spot it?
What is this soap good for?
cold process soapdry skineczemaskin issuessoap making